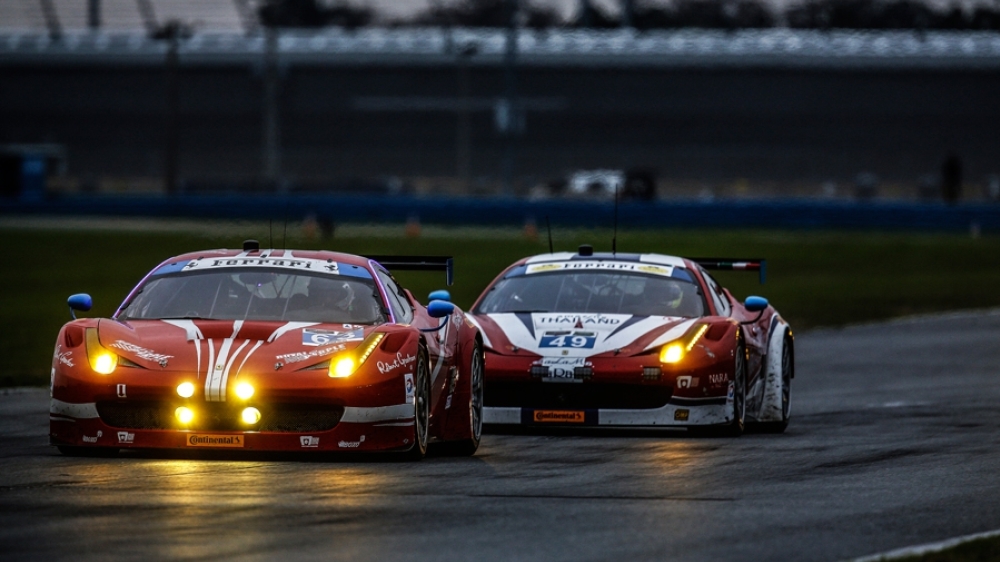 DAYTONA BEACH, FL – Townsend Bell and Bill Sweedler return to the Rolex 24 of Daytona to defend their GT Daytona class victory  in the same Ferrari 458 GT Daytona but with a different number and team. The same Ferrari 458  Italia equipped with Motegi Racing wheels is now prepared by Scuderia Corsa and will wear No. 63.

Bell and Sweedler teamed with Jeff Segal and Scott Tucker in the No. 555 Ferrari prepared by Level 5 racing and scored a controversial victory in the IMSA Tudor United SportsCar Championship season-opening race in 2014.  They initially were penalized for “avoidable contact” with another car, and were dropped to fourth.  Long after winner’s circle was over, the No. 555 was reinstated as the class winners.  After the race, Level 5 dropped out of the IMSA series and AIM Autosport took over running the 555.

Bell and Sweedler won the 2014 Patron Endurance Cup championship, and return to launch defense of that prestigious title with a new deal.  During the off-season, Sweedler  signed with Scuderia Corsa, which scored two GT Daytona class victories last year.

“The 63 chassis we will run at the Rolex 24 is the 555 car that we won the race in last year and it has significant upgrades,” Sweedler says. “The car is basically brand new with the upgrades that we had put on from ’14 to ’15.”

Segal returns to the team, too, along with newcomer Anthony Lazzaro.  The team rates among the top favorites in the GT Daytona class.

“I don’t know any racer that doesn’t go into a race not wanting to win,” Sweedler says. “There’s only one top step (of the podium).  Are the expectations high?  Absolutely! Do we want to win? Absolutely!  Do we want a chance to come back and win the series? Absolutely!  We were leading the championship with nine races under our belt and two to go and it got away.  We will give 110 percent this year.  The championship is our goal.  While the Rolex 24 at Daytona is the crown jewel of this series – and we won it last year – we want to win it again and go on to finish out the season strong and win the championship too.”

Practice for the Rolex 24 starts Thursday at Daytona International Speedway. Qualifying is Thursday afternoon and the race will start at 2:10 p.m. Saturday.  The first two hours of the 24-hour endurance car will be televised live on the Fox Network.  Live timing and scoring will be at www.imsa.com.

Previous Post RACE CARS MOUNTED ON MOTEGI RACING WHEELS WILL BE COMPETING AROUND THE GLOBE THIS WEEKEND IN A VARIETY OF MOTORSPORT EVENTS, INCLUDING RED BULL GLOBAL Next Post 2016 FIA FORMULA E LONG BEACH ePRIX
Menu
To give you the best possible experience, this site uses cookies. For information about cookies and how you can disable them view our Cookie Privacy Policy.OK