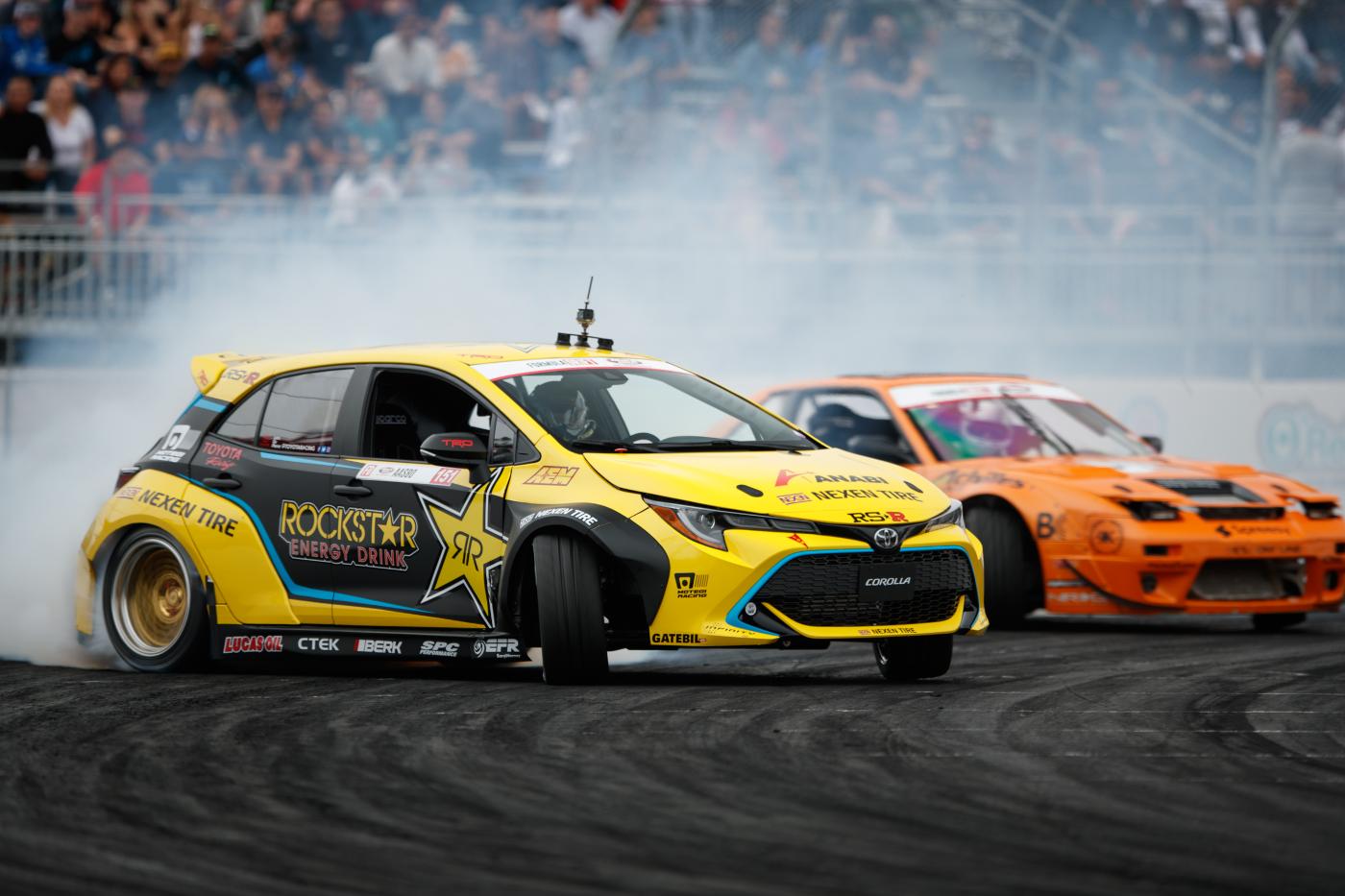 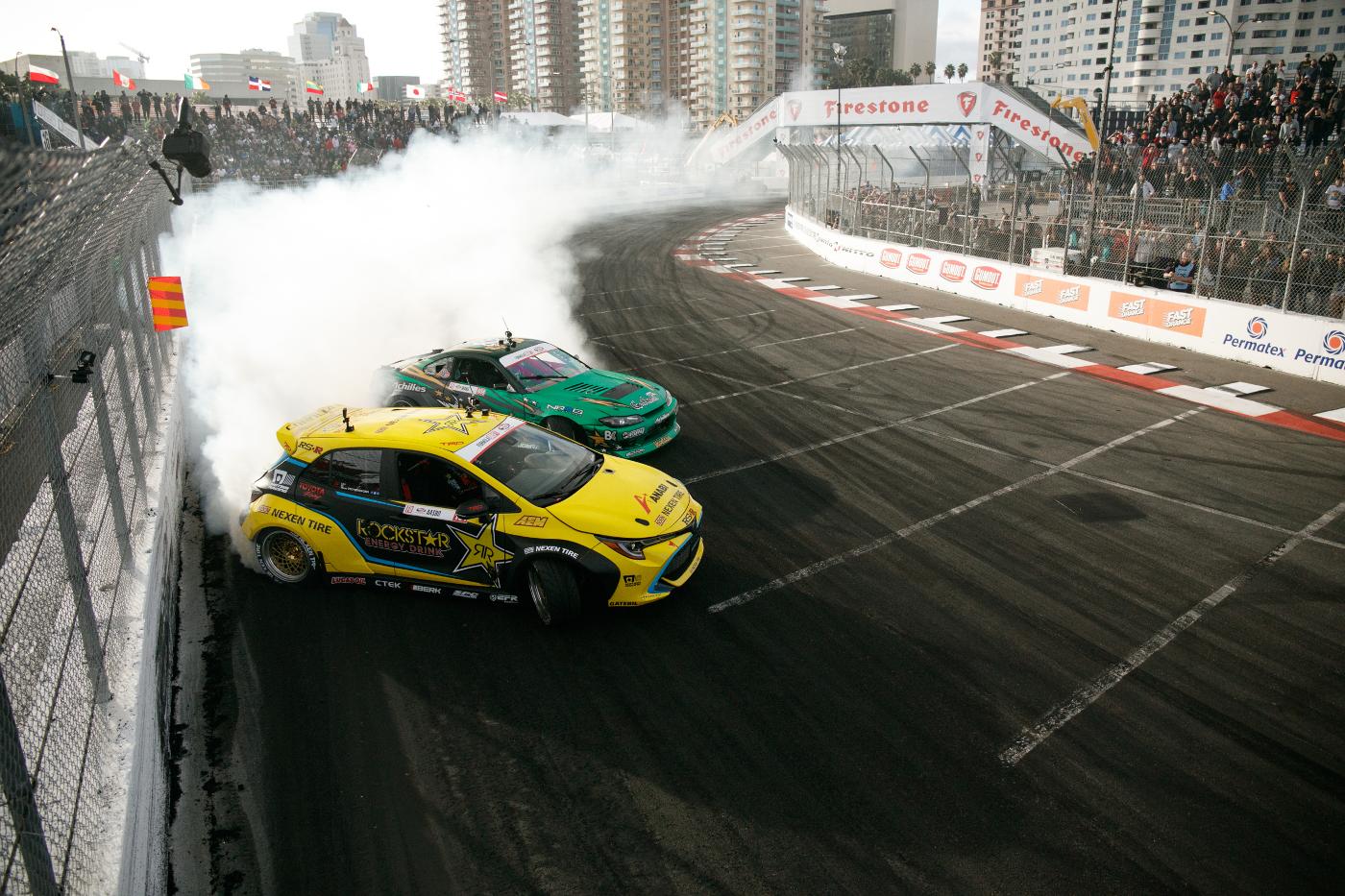 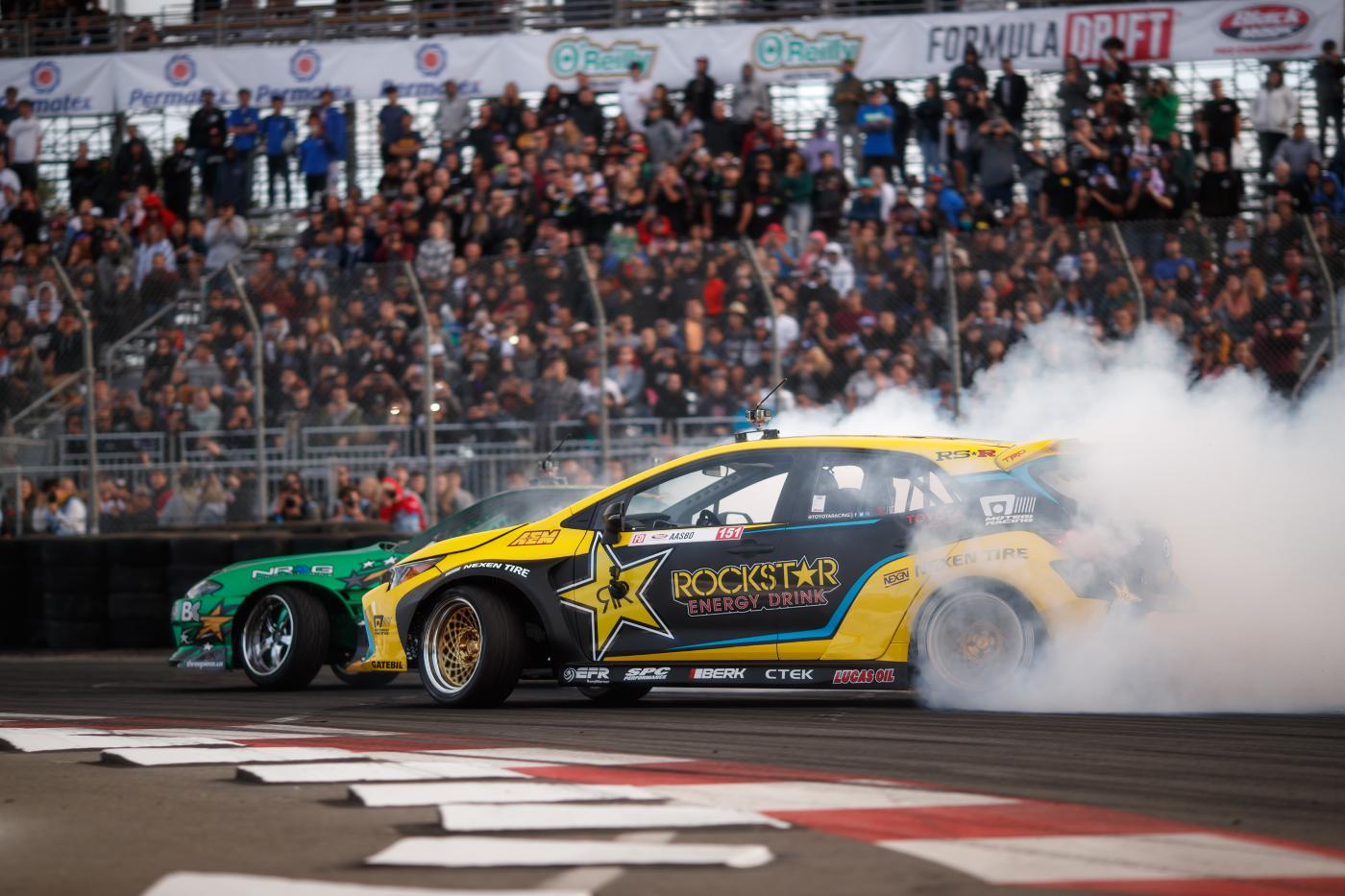 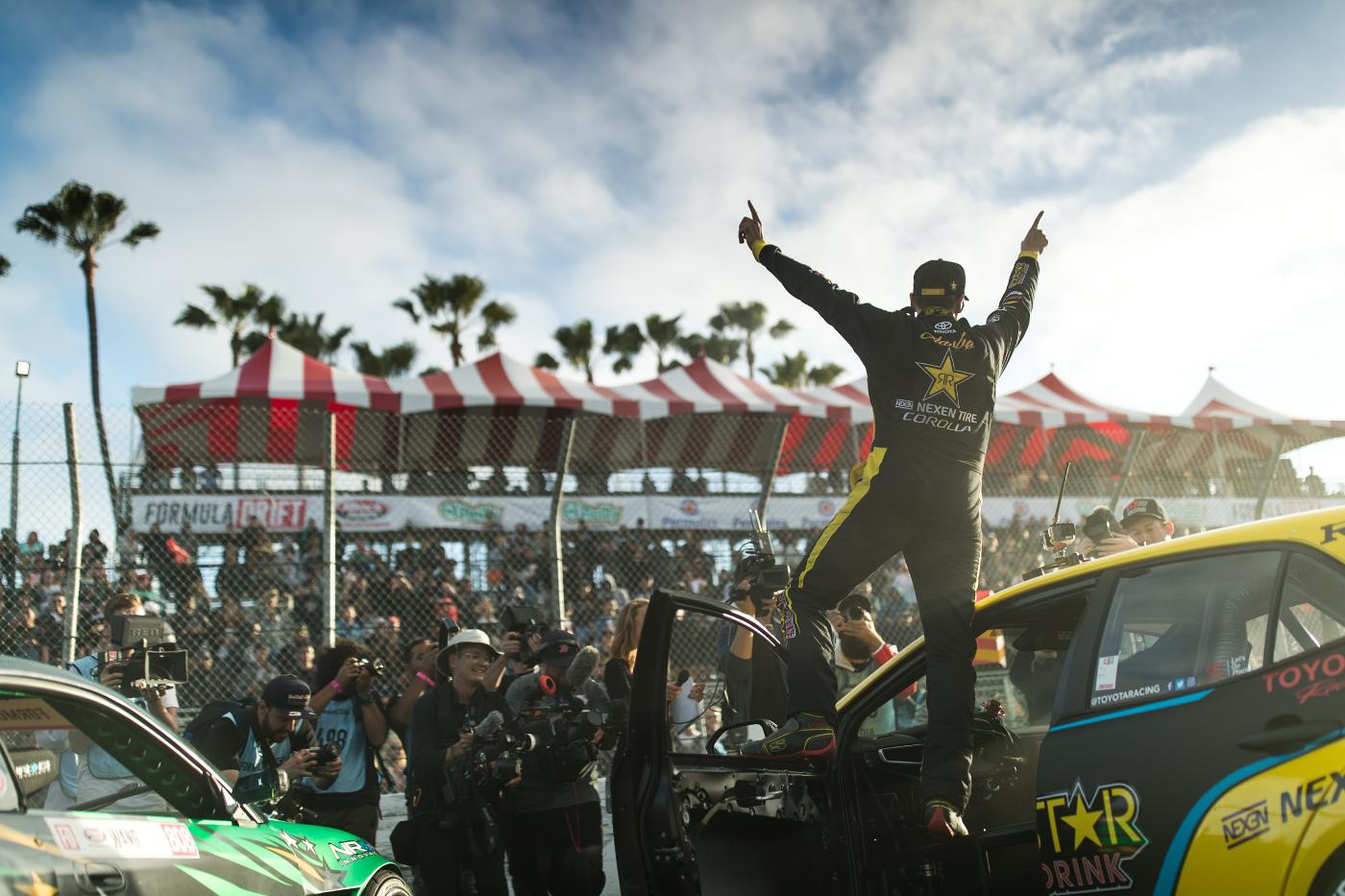 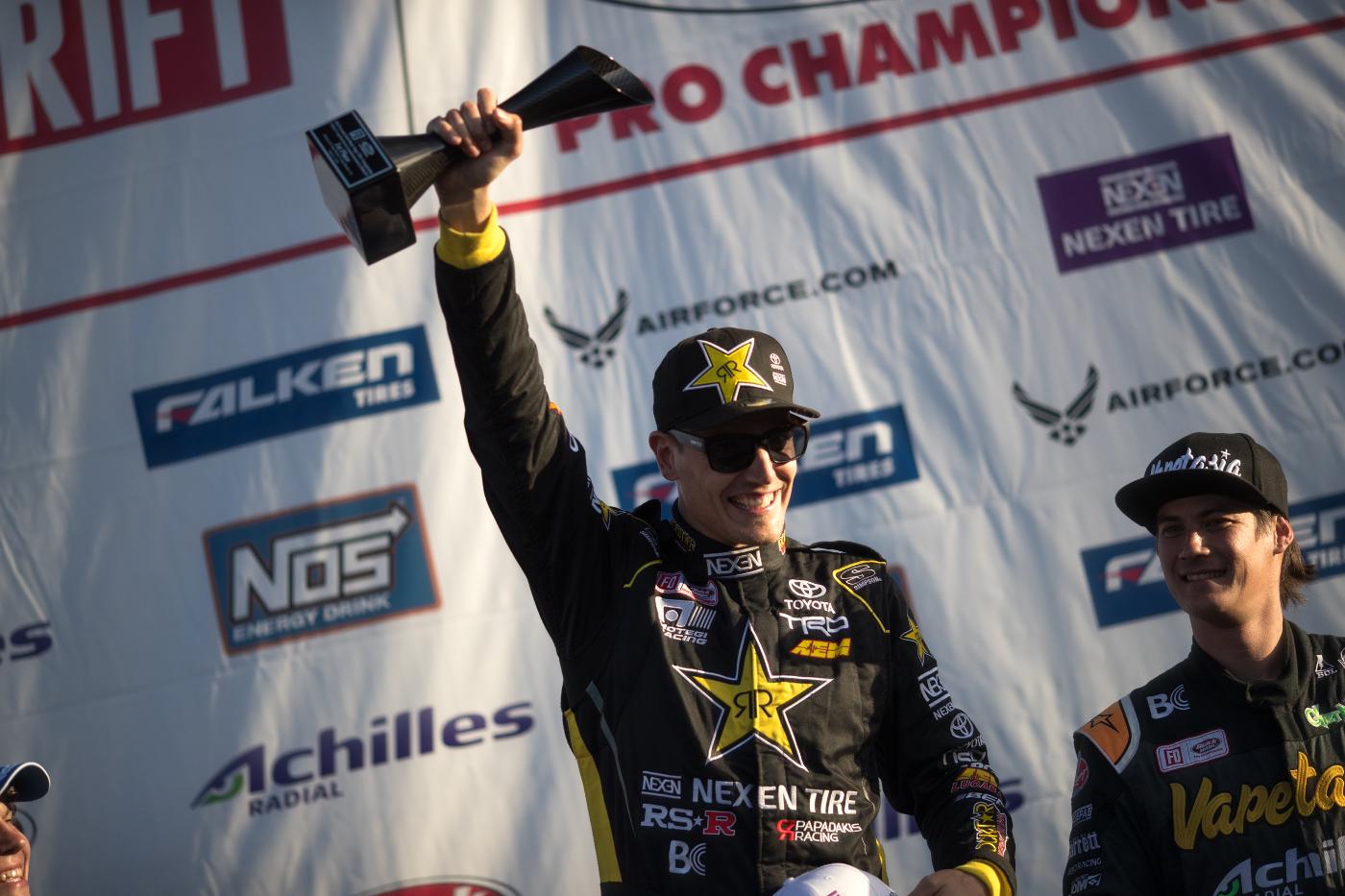 “I’m a little bit speechless right now,” said Aasbo after the podium ceremony on Saturday. “We’ve been working so hard to get the new car built, and to find ourselves here on the top step of the podium at Round 1 feels amazing. All credit goes to the team for the incredible effort they put in during the offseason.”

The most winning driver in the series to date, Aasbo has a record of 11 event wins and is the 2015 Formula Drift World Champion. He finished the 2017 season second in the points and says he is hungry for another title.

“While the team was building our new car in the shop here in California, I was practicing. I spent the winter in Norway running ice tracks with friends and I’ve never felt more prepared to take on a championship than I do right now,” said Aasbo.

Long Beach is one of the most challenging stops on the Formula Drift calendar. Drivers must thread the needle between intimidating track walls, sliding sideways at 90-plus miles per hour through Turns 9, 10 and 11 of the Toyota Grand Prix of Long Beach street course. The event is an annual sell out that sees enthusiastic fans pack into the venue, overflowing grandstands and crowding into the vendor display and pit areas during scheduled breaks in the action.

Aasbo qualified fifth, advanced past rookie Matt Vankirk in the opening round, and faced down rival Kristaps Bluss in the Top 16. He battled past Justin “JTP” Pawlak and bested 2017 Rookie of the Year Piotr Wiecek in the Final 4.

The final match of the day saw Aasbo face Forrest Wang in a close battle. It took a one-more-time re-run for judges to make a decision and, as fans cheered, Aasbo got the nod to claim the top step of the podium.

“It has been a great experience to partner with Toyota on the release of the new Corolla Hatchback,” said team owner Stephan Papadakis. “A lot of development goes into preparing a new car for competition and it’s been an exciting challenge to be the first team in the world to work with this model.”

Toyota engineers from Japan arrived at the track on Saturday with a special finishing touch, applying an XSE badge to the competition car to give it an Executive Sport Edition designation.

Papadakis Racing first revealed the all-new competition car as part of Toyota’s new vehicle launch for the Corolla Hatchback at the New York International Auto Show less than two weeks ago. The rear-wheel drive converted Rockstar Energy Drink / Nexen Tire Toyota Corolla Hatchback produces 1,000 nitrous-boosted horsepower from its four-cylinder turbocharged Toyota 2AR engine. It is the latest build from a team that has built a reputation for challenging the status quo with its innovative competition builds.

Drifting is a high-skill, high-powered motorsport with an emphasis on car control. In the Formula Drift series, drivers compete in knockout heats on a closed course, sliding sideways in trials judged on speed and style. With origins in Japan, it is one of the fastest growing forms of motorsport in the world.

ABOUT FREDRIC AASBO: Known for his flat-out style, champion driver Fredric Aasbo has achieved 100-plus podium finishes on three continents over the past decade of competition. With 11 outright victories in Formula Drift, he is the most winning driver in series history.

Aasbo made his U.S. debut at a global drifting invitational in 2008 and scored the 2010 Formula Drift Rookie of the Year title. Since then, he has charged through the drifting ranks around the world and is both a fan favorite and championship winner.

Originally from Ski, Norway, Aasbo now splits his time between his native country and Southern California.

ABOUT PAPADAKIS RACING: The Papadakis Racing team began drifting in 2004 and is the most winning team in Formula Drift history, earning the 2015 title with driver Fredric Aasbo, as well as back-­to­-back championships with driver Tanner Foust in 2007 and 2008. The Rockstar Energy Drink / Nexen Tire Toyota Corolla Hatchback is the latest competition build from the Hawthorne, California, based team.

Team owner Stephan Papadakis is a legend of sport­-compact racing who began building his reputation in the 1990s with the first front-­wheel ­drive, tube-­chassis drag car in the U.S. The team earned multiple records and championships in the discipline, turning in elapsed times and trap speeds previously thought unattainable in front­-drive drag cars. Papadakis’ successes in front­-wheel drive were matched by his efforts in rear-­wheel drive when he campaigned just the fifth car to join the NHRA’s Sport Compact 200 MPH club.