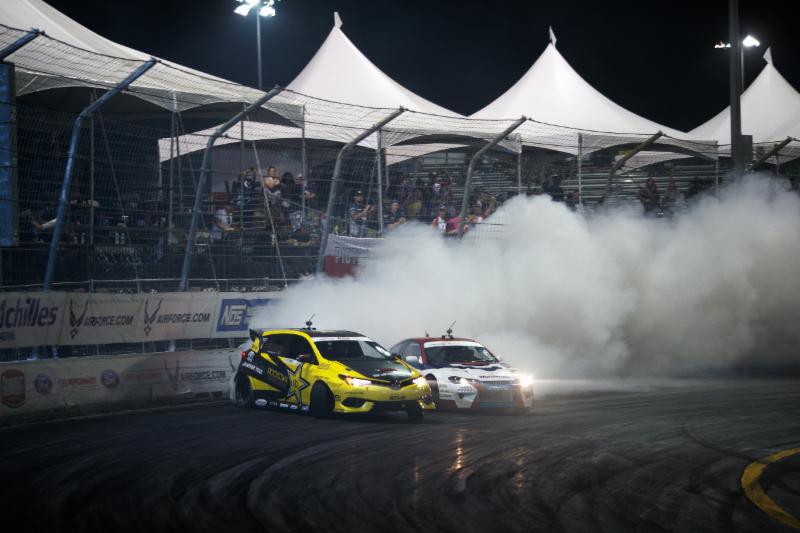 “What a fantastic season in our new car,” said Aasbo. “To bring home the Auto Cup as well as second-place in the championship with a brand Rockstar Energy Drink / Nexen Tire Toyota Corlloa iM really shows the remarkable capabilities of Toyota vehicles and our whole team.”

Aasbo spent the season fighting at the top of the points with Irishman James Deane, and entered the Irwindale finale a long shot for the title. When first and second in the title were decided in qualifying, Aasbo and his Papadakis Racing squad were left in an enviable no-pressure position for the last event at the track.

The Irwindale Event Center, long considered the spiritual home of the sport of drifting in the United States, is expected to close as the 63-acre facility is slated for redevelopment.

“It was great to get out there this weekend and just throw it down at one of my favorite tracks in the world,” said Aasbo, who ended the day in fifth place. “I feel very fortunate to have had the experience of bringing home my first big championship with a win there in 2015 and knowing it’s slated to close made this year’s finale a bittersweet experience.”

This season, Aasbo scored a pair of outright event wins, at the stops in Orlando and Canada, and brought home a second-place podium in Seattle. He also entered the record books as the most-winning Formula Drift driver in history, with 10 victories.

At the season-ending awards banquet Sunday night, the driver picked up the second-place cup in the driver’s championship. Toyota Motorsports Marketing Coordinator Darren Rogado accepted the manufacturer’s plaque on behalf of Toyota, to cap off the carmaker’s first official season in drifting. Tire partner Nexen scored second in the Tire Cup.

The team won the championship in 2015, with driver Fredric Aasbo, and 2017 marks the third championship runner-up result in the driver’s Formula Drift career. He also scored the second-place trophy in 2014 and 2016. Team owner Stephan Papadakis said this year’s result was an achievement that he feels especially good about.

“The development curve on a new car can be steep and I’m proud of our team for putting together a winning effort so quickly,” said team owner Stephan Papadakis. “It gives me a lot of confidence in our ability to grow and evolve with the sport of drifting and I’m already excited about what next season will bring.”

In the grandstands for the event were a group of contest winners for partner Rockstar Energy Drink, who joined driver Aasbo for a one-on-one brunch on Sunday, as well as a large number of family and friends from close to home and abroad.

Formula Drift’s first championship event took place at the venue 14 years ago. The Papadakis Racing team has competed at every Irwindale event ever since and has three Formula Drift titles to its credit. The team won the title at Irwindale in 2015 with Aasbo, and earned two titles with driver Tanner Foust in 2007 and 2008.

Earlier in the week, Aasbo joined the other drivers on Team Toyota for a special media event where pro drivers partnered with local media members for advanced car control instruction showing the capability of the Toyota 86. Next up for the team is a trip to Las Vegas for SEMA, and a stop in Texas for Toyota’s annual Motorsports Day at the company’s new headquarters in Plano.

The Papadakis Racing team began drifting in 2004 and is the most winning team in Formula Drift history, earning the 2015 title with driver Fredric Aasbo, as well as back-to-back championship titles with driver Tanner Foust in 2007 and 2008. The Rockstar Energy Drink / Nexen Tire Toyota Corolla iM is the latest competition build from the Hawthorne, Calif., based team.

Team owner Stephan Papadakis is a legend of sport-compact racing who began building his reputation in the 1990s with the first front-wheel-drive, tube-chassis drag car in the U.S. The team earned multiple records and championships in the discipline, turning in elapsed times and trap speeds previously thought unattainable in front-drive drag cars. Papadakis’ successes in front-wheel drive were matched by his efforts in rear-wheel drive when he campaigned a Civic that became only the fifth car to join the NHRA’s Sport Compact 200 MPH club.