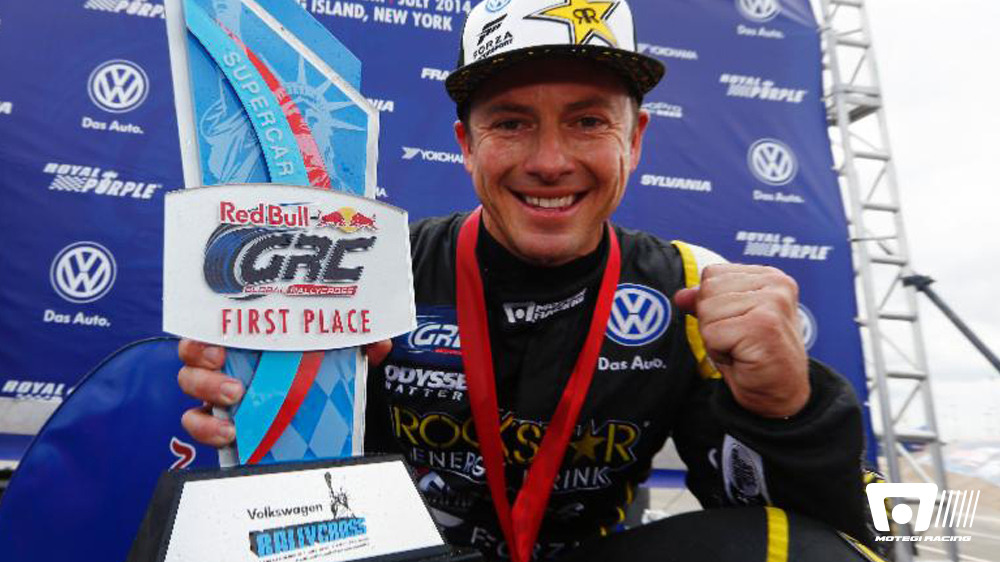 It was all about the starts for the two-time champion, who blazed off the line to use the sub- two-second 0-60 launches of the Rockstar Energy Drink Volkswagen Polo to maximum effect.

“The starts were the critical factor for me here,” said Foust. “It can be very difficult to make a pass on a tight rallycross course and getting out front early and staying out of trouble is key to winning.”

Foust also credits the Volkswagen Andretti Rallycross team with nailing the car set-up to handle the New York course. The six-turn, half-mile track layout featured five right-handers and only one left. Foust and Volkswagen teammate Scott Speed were fast and confident while many other drivers struggled to get the most out of their competition cars as uneven tire wear became a factor.

“We were fastest in opening practices and stayed up front all weekend long,” said Foust. “Having a car that was ready to win from the moment we hit the ground here in New York shows the advantage of working with a team like Andretti.”

Foust opened the weekend as one of only four drivers to break through the 30-second mark in qualifying and achieve a lap time in the 20s. In heat racing, he found his stride in the second round, blazing off the line to lead wire-to-wire in his Rockstar Energy Drink Volkswagen Polo. He took another lights-to-flag victory in the Semifinal round to earn a front-row starting position in the 10-car Final.

Starting from the middle of the front row, Foust kept his cool through two red-flag restarts as other drivers tangled on the course. When the abbreviated six-lap Final got underway, he was off the line first and never looked back as drivers jostled for position behind him. Although teammate Speed passed nearly half the field on the way to a second-place finish, he was demoted to ninth on a penalty assessed during the first red-flagged race. Nelson Piquet Jr. and Ken Block claimed second and third.

A regular top finisher, Foust has earned a podium in more than half of his Global Rallycross Championship starts since the series began in 2011.

“This year, the speed has been there but the results haven’t,” said Foust. “It’s nice to get this monkey off my back this season and earn a win in GRC. It feels like I’m headed in the right direction now.”

The Volkswagen Rallycross New York win was the second rallycross victory for Foust in less than a month. He also stood atop the World RX podium in Finland three weeks ago. The driver is making a full campaign on the Global Rallycross Championship in 2014, along with a partial season of guest appearances in the World RX series.

Rallycross is a blend of circuit racing, off-road racing and rally competition. It promises intense crowd-pleasing action in a fan-friendly track environment. As many as 10 drivers line up to start at once, piloting high-horsepower compact cars through race traffic over a challenging short course that features jumps, unbanked turns, hills and transitions between pavement and gravel.

Foust and the Volkswagen Andretti Rallycross team will bring the Rockstar Energy Drink Volkswagen Polo back to Global Rallycross competition in just a week’s time for Round 5 at the dirt track at Charlotte Motor Speedway, July 25-26.

He has also held multiple world records including for the astonishing Hot Wheels Double Loop Dare, which saw Foust drive a car through a 66-foot loop-the-loop. He also scored the indoor speed record for TV’s Top Gear USA, and set a distance jump record with Hot Wheels when he made a 332′ ramp-to-ramp leap in a truck at the Indy 500.

His varied race experience includes multiple years of open wheel competition, the Pikes Peak Hill Climb, rally racing, various types of sports car racing and the SCORE Baja. He has represented the USA in the annual Race of Champions three times, teaming with NASCAR star Carl Edwards in 2008, Travis Pastrana in 2009, and Mick Doohan in 2010.

A year after making his overseas debut in the European Rallycross Championship in 2010 with a select campaign, Foust became the first American driver to win a round of that championship and finished both 2011 and 2012 ranked in the top three; he won two of the three rounds he entered last year. At home, Foust has been a dominant driver in rallycross since it was first introduced to the United States in 2010.

When he isn’t racing, the professional driver also performs in films and on television. He is an on-air host for the U.S. version of the seminal BBC auto show Top Gear, produced by BBC Worldwide Productions and airing on the HISTORY channel. Episodes of his online documentary series, Life in the Foust Lane, are available on the Rockstar Energy Drink YouTube channel.

Foust also handles stunt driving in numerous popular films, TV shows and commercials. He is featured as a stunt driver in the Need 4 Speed film, as well as other major releases including the Bourne Legacy, Bourne Ultimatum, Fast and Furious: Tokyo Drift, Dukes of Hazzard, Red Dawn and Iron Man 2 movies.

Rockstar Energy Drink is designed for those who lead active lifestyles – from Athletes to Rockstars. Available in over 20 flavors at convenience and grocery outlets in over 30 countries, Rockstar supports the Rockstar lifestyle across the globe through Action Sports, Motor Sports, and Live Music. For more information visit: www.RockstarEnergy.com

TANNER FOUST’S RALLYCROSS PROGRAM IS MADE POSSIBLE BY

Previous Post VIPER WINS GTD AND FINISHES SECOND AND THIRD IN GTLM IN CANADA, BELL AND SWEEDLER RETAIN GTD POINTS LEAD DESPITE PENALTY, MAZDA POSTS SEASON-BEST Next Post 5 WINS AND 17 PODIUMS FOR MOTEGI RACING WHEELS AROUND THE GLOBE
Menu
To give you the best possible experience, this site uses cookies. For information about cookies and how you can disable them view our Cookie Privacy Policy.OK