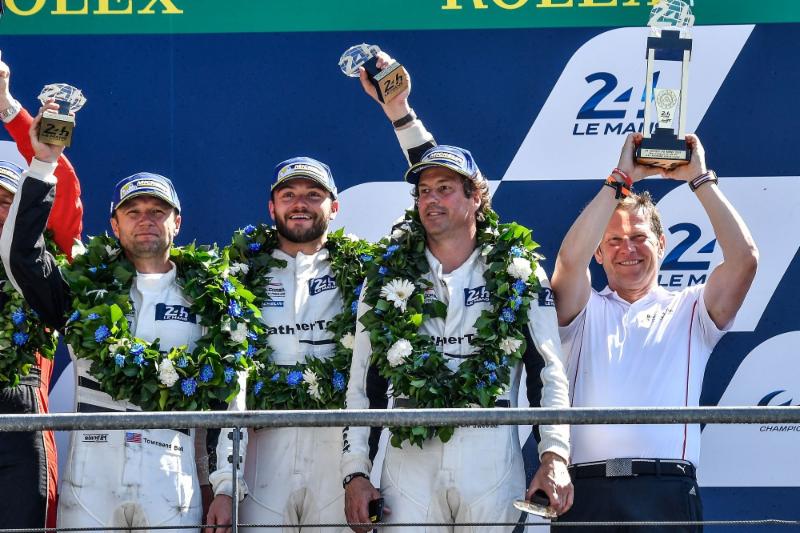 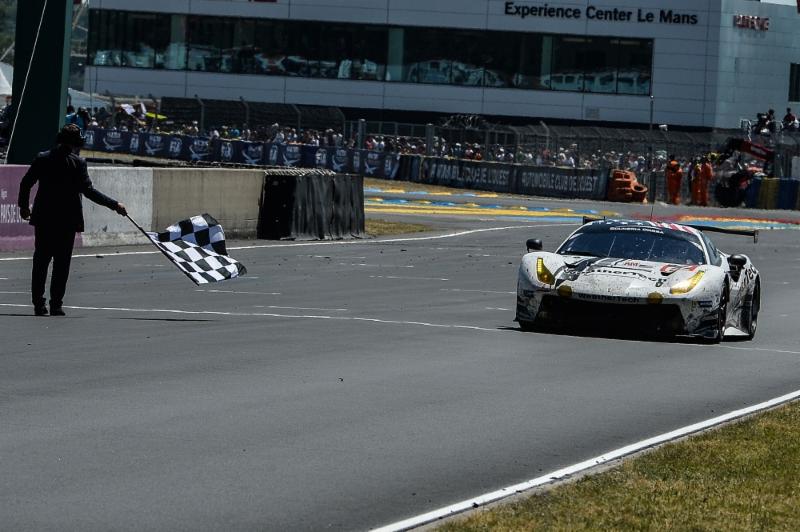 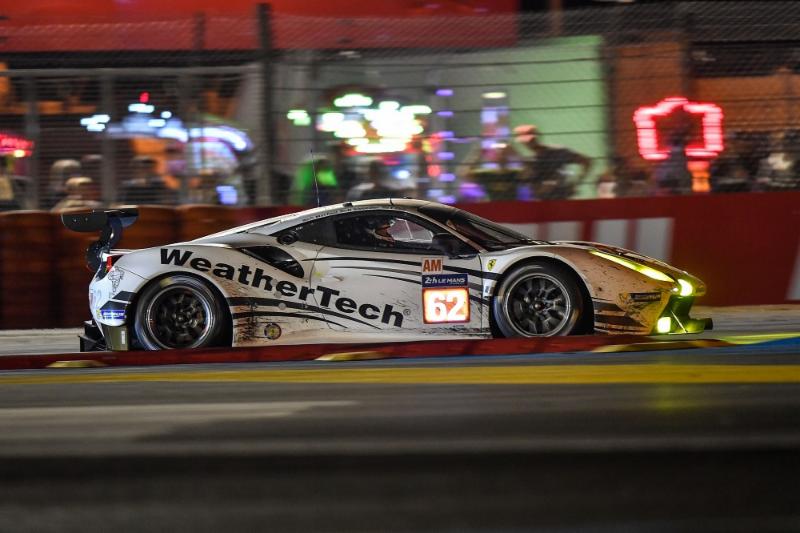 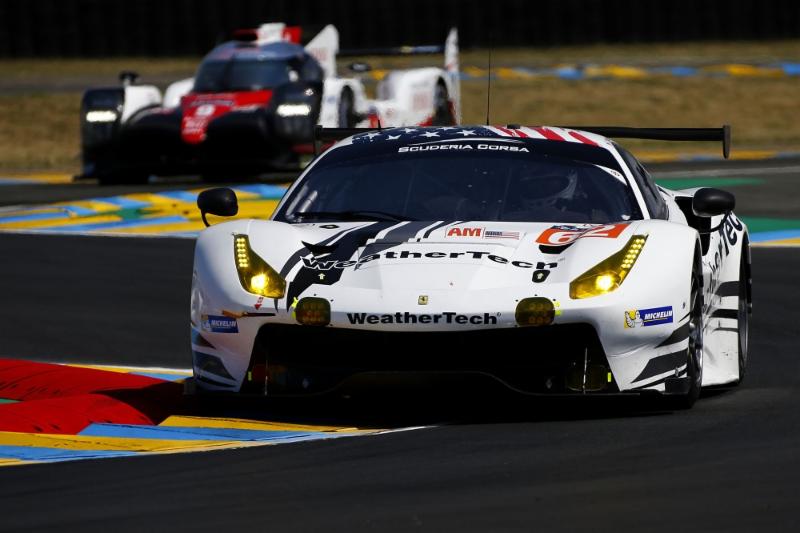 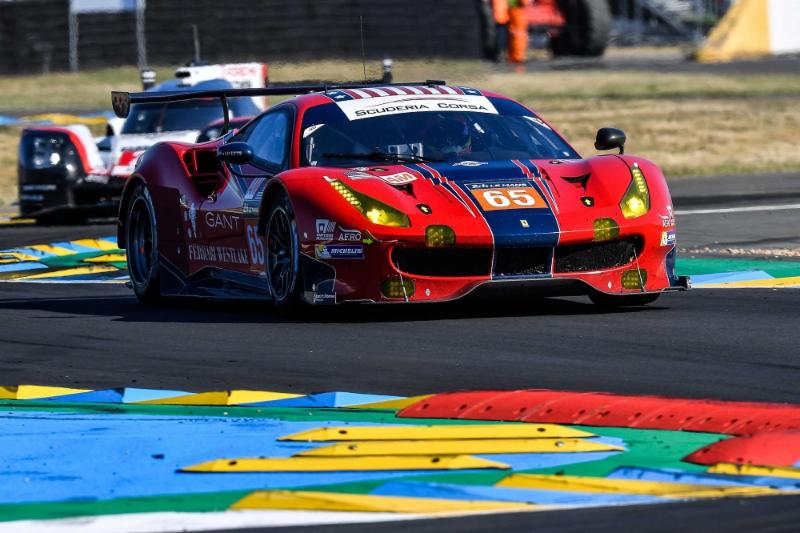 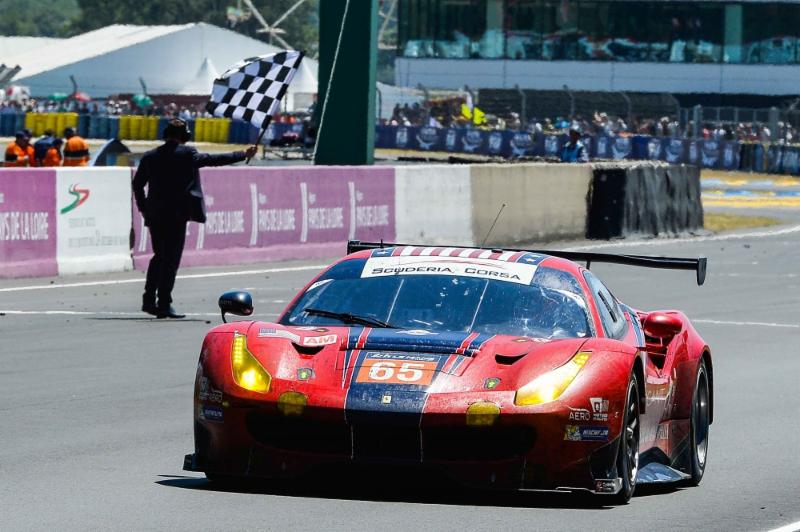 LE MANS, France (June 18, 2017) -Competing on the largest stage in international sportscar racing, Scuderia Corsa would continue their 100% podium rate at the famed 24 Hours of Le Mans with a third-place in class during today’s running. Persevering through constant obstacles inherent in the event, a combination of strong driving, teamwork, and strategy would earn drivers Bill Sweedler and Townsend Bell their third podium in succession, with new teammate Cooper MacNeil taking his first. In addition, a hard fought effort by the team would also see Christina Nielsen, Bret Curtis and Alessandro Balzan finishing the 24 hours and taking the checkered flag in 14th.

With the 70th anniversary of Ferrari adding to the mystique of the 2017 race, the team would bring two Ferrari 488 GTE entries for the first time in team history. After two consecutive podiums in two attempts, the team would arrive as the defending champions with a commitment to continue the trend.

For the No. 62 WeatherTech Ferrari 488 GTE, a strong opening would see the team lead early, with all three drivers taking on triple-stints, meaning racing at top speeds for nearly three hours at a time.

Sitting within the top-four throughout much of the night, Cooper MacNeil would gain three positions to third as the sun rose, with Sweedler and Bell managing the final hours to ensure their position as part of an all-Ferrari podium.

In the No. 65 entry, an up-and-down event would highlight everyone’s resolve to push through adversity. Throughout the race, the team would overcome a mix of challenging situations, which included starting from the back after a problematic qualifying session, a mid-race tire puncture, and ended with the crew working tirelessly to make late-race repairs after contact, ensuring the car would go back on track for the final minutes in order to finish.

For Cooper MacNeil, a podium effort was the result of complete execution.

“Everybody executed what they had to do, and everybody delivered,” stated MacNeil. “The drivers delivered, couldn’t make any mistakes or put a wheel off or hit anybody. That’s the key to endurance racing is just to stay out of trouble and keep turning laps. Bill was killing it, putting it on the podium three years in a row, and Townsend was flying out there with the pace of anybody. Everybody delivered, it was fantastic prep of the car, and hats off to Scuderia Corsa for everything they did. The team delivered, the drivers delivered, and we’re on the podium.”

“Two third-place finishes and a win, I don’t know what to say,” stated Sweedler. “Scuderia Corsa has come through again, WeatherTech is an amazing sponsor this year, and just the whole team. I can’t thank everyone enough.”

For Townsend Bell, walking away with his third trophy in as many years is an amazing team accomplishment.

“It was a great day,” stated Bell. “The WeatherTech Ferrari was just terrific. We’re under a lucky star here in France. Three years, three podiums, all with Ferrari. The third year is even sweeter because you know how hard it is. I’m exhausted, but thrilled at the same time, especially for Cooper MacNeil. He’s been here several times so to have his first podium, just seeing the smile on his face when I first saw him, that makes it all worthwhile.”

For Giacomo Mattioli, satisfaction comes from another podium.

“I’m very happy and proud of the team,” stated Mattioli. “After last year’s win, we were aiming for the third podium in a row, which is really remarkable. The drivers did a great job, and they performed flawlessly. They didn’t make any mistakes, and that’s really what made it happen. The crew did a fantastic job like last year, and every pit stop was like clockwork. The car was very quick and reliable, and it was a real team effort and I’m really glad we delivered for WeatherTech. Unfortunately the challenges for the No. 65 reminded us of just how challenging this event can be. This is part of the racing experience the we must not forget. I’m proud of what the No. 65 drivers and crew accomplished to finish Le Mans.”

The team will now return to the U.S., with the next stop on July 2 at the IMSA Six Hours of Watkins Glen, where the team will once again arrive as the defending winners.

Previous Post SMP Racing Ferrari 2017 FIA World Endurance Championship Next Post North American Endurance Cup Victory at Six Hours of Watkins Glen Creates Championship Lead for Scuderia Corsa
Menu
To give you the best possible experience, this site uses cookies. For information about cookies and how you can disable them view our Cookie Privacy Policy.OK