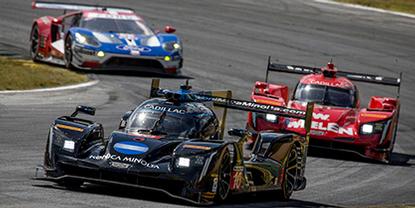 Not even today’s early exit from the 20th edition of the iconic 10-hour endurance marathon could put a damper on one of the most prolific seasons in North American sportscar racing history as the Taylors took to the track with five victories and seven podium finishes in the bank and needing only to take the green flag to start today’s event to clinch first place in the driver and team standings.

The day came to an unexpected and early end, however, when third driver Ryan Hunter-Reay – the 2012 IndyCar Series champion, 2014 Indy 500 champion and runner-up with Jordan Taylor and veteran Italian Max “The Ax” Angelelli at the 2013 Rolex 24 At Daytona – coasted into the pits at the two-hour, 27-minute mark having lost drive to the rear wheels. The team pushed the car to the garage and withdrew from the race soon after.

“We are really happy to win the drivers and team championship, as well as helping to secure the manufacturer championship for Cadillac,” said team owner Wayne Taylor, a three-time sportscar racing champion who most recently drove the No. 10 Prototype to the championship in 2005. “We had finished every single race this year. I am not really sure what happened today. We lost drive to the car and we had to withdraw from the race. That doesn’t take away from what we accomplished this year with five straight wins and taking the big ones at Daytona and Sebring. Winning in Detroit for Cadillac is always special, as is winning on the streets of Long Beach for Konica Minolta. A great accomplishment by the team, everyone at Cadillac, Dallara, ECR Engines and, of course, our sponsor Konica Minolta.”

Aside from the team’s first Petit Le Mans win since the Taylor brothers and Angelelli won this race in 2014, the remaining goal for the weekend were the driver and team title sin the Tequila Patron North American Endurace Cup, the championship-within-a-championship rewarding the best performers in the four iconic endurance events on the schedule – the Rolex 24, the Mobil 1 Twelve Hours of Sebring, the Sahlen’s Six Hours of The Glen, and the Petit Le Mans. The Taylors and the No. 10 Konica Minolta Cadillac DPi-V.R team arrived at Road Atlanta trailing the No. 5 Action Express Racing Cadillac DPi-V.R team by just two points. With the early exit by the No. 10 Konica Minolta Cadillac DPi-V.R, the No. 5 team was able to clinch that title by the four-hour mark of today’s race.

“We are happy to win the driver and team championships for the whole season,” said Ricky Taylor, who with his younger brother, Angelelli and three-time NASCAR Cup Series champion Jeff Gordon started the season with a dominating victory in the Rolex 24 At Daytona and never looked back. “The team and car had run flawlessly all year. It’s too bad to have an issue at the Petit Le Mans when we were fighting for the TPNAEC title. It was a crazy start to the race with the wet and then going dry. It was a lot of work at the start. The team did a great job all year. Everyone at Cadillac, Dallara and our sponsors at Konica Minolta all have a hand this championship. The five wins to start the season was great and especially winning the Rolex 24 and Sebring – the stuff all drivers dream about. To win it with my dad, Jordan and Max, who is also family, is really a dream season.”

Ricky Taylor’s bid for a fourth consecutive pole position and fifth of the season was thwarted when he ended up seventh in Friday’s qualifying session. He played it safe during the early laps of today’s race but made steady and determined improvement in track position during his opening two-hour, 20-minute stint. He and the team worked their way into the top-five during a round of green-flag pit stops at the one-hour mark, and he found himself in the lead for the first time on lap 78, just past the two-hour mark. He held the point for the next 13 laps before pitting on lap 91 to turn the car over to Hunter-Reay.

Just a short time later, Hunter-Reay coasted into the pits from his spot in the top-five and the team called it a day – and a season – shortly thereafter.

“We had a good race going,” Hunter-Reay said. “We were focused on the Endurance Cup. I took over the car from Ricky. I was getting heat in the tires and then, on the backstraight, we all of a sudden lost drive to the rear wheels. It is amazing what the team has accomplished this year with the five wins. I joined them a little too late, but a great season for them and congratulations to everyone on the championship.”

Jordan Taylor, who also won the 2013 Grand-Am Rolex Sports Car Series driver championship alongside Angelelli in the No. 10 Prototype, was today’s third driver in the rotation but never had a chance to get behind the wheel.

“Being with Ricky the past four years, we have been close to winning the championship,” he said. “It means a lot to win it with family, and Max is like family, as well. We started the year strong with five straight wins. Add the victories at Daytona and Sebring, Ricky had all of those poles, and we won Long Beach, too. Winning at Detroit was great, as well. We are a family team. The crew is very close. We were the first ones to work with the Cadillac this year. For us to win the championship with Cadillac, the ECR (Earnhardt Childress Racing Engines) guys and Dallara in the first year of the DPi prototypes is special. For us to win the championship means a lot to everyone who developed the car, as well as our sponsor Konica Minolta.”

The 2018 seasons begins with the traditional Rolex 24 At Daytona Jan. 27 to 28 at Daytona (Fla.) International Speedway.

Previous Post Scuderia Corsa Secures IMSA Championship, Title for Ferrari at Petit Le Mans Next Post Fredric Aasbo vies for second Formula Drift championship this weekend
Menu
To give you the best possible experience, this site uses cookies. For information about cookies and how you can disable them view our Cookie Privacy Policy.OK